As Lois Hall outlines in her history of the Pohangina Valley, large areas of open grassland such as those found in Canterbury and eastern Hawkes Bay had been quickly settled in the 1840s and 1850s, mainly by more wealthy settlers. But by the latter part of the nineteenth century, the government turned its focus to the provision of land for the settlement of those of lesser means and the descendants of the original settlers who sought to own their own farms. Attention turned to regions that were still forested and undeveloped, such as the Manawatu and western Hawkes Bay.

A government announcement published in the Wellington Independent Newspaper in 1871 states that pioneer emigrants from Scandinavia were to be “settled on some of the waste land of the Colony—Manawatu for instance”. Legislation was also passed to enable aspiring farmers with little capital to convert bush sections to farmland.

In 1886, the Wellington-Manawatu railway, running between Wellington and Longburn, Manawatu, was opened. This facilitated the milling and clearing of the thickly forested “hinterlands” of the Manawatu.

These policies and the improved access provided by the new railway were clearly effective: between 1878 and 1908, grassland increased from 5% to more than 50% of Manawatu County . 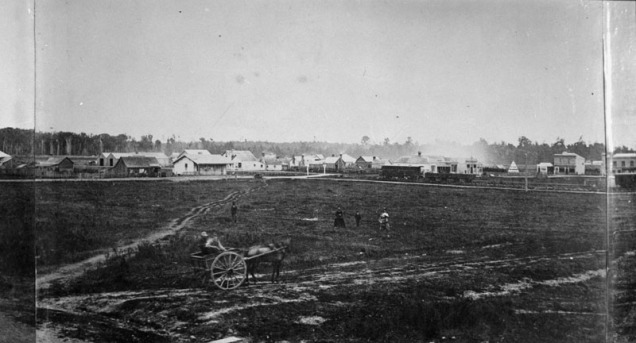 Photo: Longburn Railway Station, 1888-9. Used with permission from Alexander Turnbull Library, ref PA1-f-239-54. Above: In this view across the square in 1878, the swamp forest which covered all but Papaioea, the natural clearing in the forest when the area was surveyed by Europeans, is still visible. Within a few years this bush will have largely disappeared. From Manawatu Memory Online, Palmerston North City Library