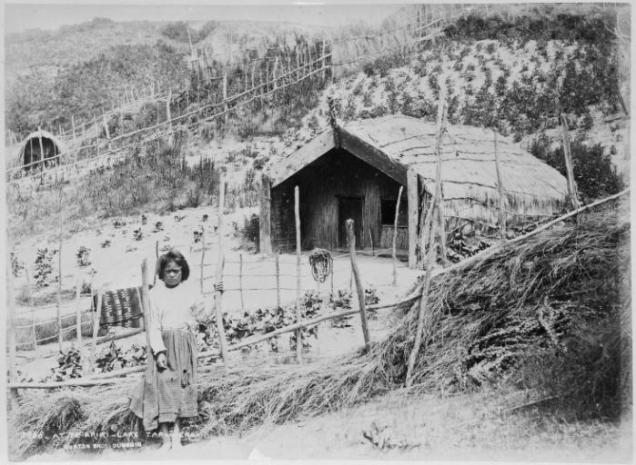 Horticulture was integral to pre-European Maori culture. As Bee Dawson states in “A history of gardening in New Zealand”, the ability to produce reliable garden crops influenced the settlement patterns of early Maori. Thus, the warmer areas of the North Island, particularly those with fertile volcanic soils, supported much larger populations than those further south where both climate and terrain made horticulture less viable. The northern two-thirds of the North Island proved most rewarding in terms of horticultural production, while Banks Peninsula in the South Island marked the southern limit of Maori horticulture. In the southern part of the South Island, Maori relied instead on bracken fern root [see the earlier post: Weeds – the great European invasion] and cabbage trees (Cordyline australis, Ti kouka in Maori) as sources of starch, to supplement protein derived from hunting, fishing and gathering.

Early reports from European explorers noted that Maori gardens were about 0.5–5 hectares in size, on sunny, north-facing slopes, and were communally owned and worked. Kumara (sweet potato) was the main crop, and could be grown throughout the northern and coastal North Island, and in the northern South Island. Four other important food plants – taro, yam, gourd and ti pore (Pacific cabbage tree) – were confined to northern gardens.

Before planting, Maori cleared and burned forest, and prepared the ground. Soils were enhanced and modified using various means. Charcoal and ash (from burning plants such as manuka) were added to increase fertility, while shell, sand and shingle were added to heavy loam and clay soils to improve consistency and optimise warmth. Stones were also used to provide shelter for seedlings and create a hot-house effect. Ditches and drains were dug around gardens, probably both to demarcate boundaries and drain water away. (These ditches and stone rows, in addition to  terracing, provide the main archaeological evidence of historical Maori horticulture at a site.) Reed or manuka-brush fences were built to protect crops from marauding pukeko (pictured).

A site was used for gardens for two to six years and then left fallow for several years, during which time a cover of fast-growing native shrubs developed. Unlike later European gardens, pre-European Māori gardens were not plagued with weeds. New Zealand’s native flora does not include weedy annuals or biennial plants that invade cultivated soils. If any tropical weeds arrived with the ancestors of Māori, they did not survive in New Zealand’s temperate climate. [See also: Weeds – the great European invasion ]

Photo top left: Young Maori girl at Te Ariki Pa, near Lake Tarawera, Bay of Plenty. Shows her standing alongside a vegetable garden and a whare. Photograph taken in the 1880s by the Burton Brothers. Not to be reproduced without prior permission from Alexander Turnbull Library ref. 1/2-004619-F. Bottom right: a Maori garden marauder – the pukeko.