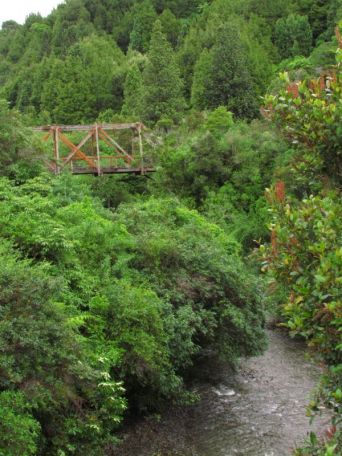 After our first excursion to Reikorangi on the last day of 2011 [see: Views of Kapiti 8: the kahikatea of Ngatiawa], I couldn’t resist another outing there with my son the next day.

I find the landscapes of Reikorangi so alluring; the natural environment itself is varied and interesting, both in its contours and mix of indigenous and exotic vegetation, but I also like the fact that its history is so palpable in the landscape. Even from the road, an observant visitor will spot old buildings, lichen-covered fences, abandoned machinery and other infrastructure. Among the historical relics to be “discovered” is the old Ngatiawa Bridge, built in 1913, which spans the Ngatiawa River immediately above its junction with the Waikanae River.

There is a tragic story behind the construction of the bridge. It was built by local sawmiller Norman Campbell to provide access to the timber mill at the end of Mangaone South Road. Campbell was one of the first Europeans to settle in Waikanae, one of a handful who established themselves even before the railway was opened, greatly improving access to the Kapiti

Coast and beyond. In 1884, the year he settled in Waikanae, Campbell established a sawmill on an a ncient river terrace below the village, called the “Pit” by locals (this is where the Bunnings timber yard now stands, click here to view map). However, in 1897, an explosion in the mill boiler wrecked the mill and killed Campbell’s nephew, Norman McKay, and putting 30 men out of work.
The mill was closed, and Campbell moved his operation to Reikorangi, taking over E. O. Smit h’s mill, located at the end of Mangaone South Road [see Views of Kapiti 6 – Reikorangi farmscape for photos of the site today]. Campbell was thus responsible for the clearing of much of the forest in this area, first on the coastal plain, and then in the Reikorangi Basin.
Interestingly, the bridge crossed from one county to another: the Horowhenua County on the west of the river and the Hutt County on the east. This led to much “discussion” between the two counties on who should pay what share of its construction. Eventually it was agreed that it would be split between Horowhenua County with a £300 share, Hutt County with £200, and the Government contributing £250.

The bridge was closed in about 1980 when the new bridge was constructed [see photo above].  Today the road bypasses the bridge, and crosses the Ngatiawa River 100 metres upstream where there is a modern concrete bridge. (Photos: C. Knight.)