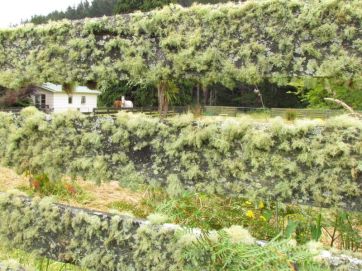 This post makes no pretensions of being a serious essay about environmental history; it is more an excuse to post a few pictures from the little Reikorangi expedition my son undertook a few days ago (see: Views of Kapiti 8: the kahikatea of Ngatiawa and The bridge between two counties: Ngatiawa Bridge).

This first picture was taken on Rangiora Road (click here to view map). The fence literally dripping with lichen was extremely enticing, and the horse peeking through the slats was an added bonus.

The second picture is of a cow and her calf, who were standing at the front fence of their paddock when I was taking photos of the kahikatea and the goat across the road, evidently wondering why I found their ungulate neighbour so fascinating (see below). They were very friendly, and both enjoyed a stroke on the nose.

The photo below shows the hill landscape just to the north-west of the St Andrews Anglican Church (the church is just out of view on the right).  The church and hall [see below right] are the first buildings  a traveller will encounter on their way up Akatawara Road [click here to view map].

It is clear from the shot how diverse land use is in the valley, with pasture, regenerating indigenous bush and exotic pine forest for timber in this view alone.

And now a little history (about the church – rather than goats, cows or lichen). The church was built in 1908 and has long been integral to this little valley community. The land it was built on was generously gifted by the Parata family. Wi Parata and his family were an influential local family and land-owners [see also: The kohekohe forest of Hemi Matenga Reserve].

About this time there were about 68 families living in the valleys in the area. As Chris and Joan McLean explain in their history of Waikanae, the village of Reikorangi brought together two elements in the community: transitory people who were associated with the felling and sawmilling industry (around which the village had been established), and the settlers who had come to establish farms and live off the land. With the growing population of Reikorangi and only a rough track to reach Waikanae (then known as Parata Village) 4.5 kilometres to the west, the community agreed that a church was needed within the village itself.

Apparently, the church’s bell [see photo right] was salvaged from the wreck of the steamer ship Devon in Wellington harbour in 1913, and still calls the people of the valley to services today.