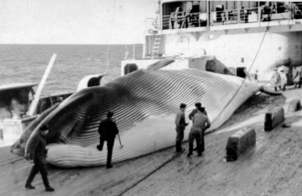 Like so many other industries based on a finite natural resource, whaling in New Zealand has a long history of over-use, leading to a collapse of that resource. The southern right whale was caught from shore-based stations in the early nineteenth century, but by 1850 their numbers had been so depleted that shore-based whaling was limited.

In the early twentieth century, motorised launches and explosive harpoons allowed whalers to reach further out into the ocean and catch the faster swimming humpback whales.  The 1966 Encyclopedia of New Zealand notes that catches of humpback whales in Cook Strait could occasionally exceed two hundred in the post-World War II years, but that the catches dropped sharply in 1961 and still further in 1962.

At the time, Australian and New Zealand scientists suspected the answer, but it was not until the fall of the Soviet Union that the true story came out – Soviet whaling fleets had taken 25,000 humpback whales from the Southern Ocean in 1960 and 1961. In two years, the Soviets took five times as many whales as New Zealanders took in fifty, resulting in the near extinction of the humpback whale.

The whaling industry had industrialised and globalised, with 45,000 ton factory ships sweeping the globe in search of the remaining whales. The Soviet industry, at least, was thoroughly and deliberately illegal. For instance, in the twenty-five years from 1948, the industry reported catching 2710 humpback whales. The true figure, for the whole globe, was 48,477. Hunting Southern right whales was banned in 1937, but the Soviet fleets caught over three thousand. They reported catching four.

The industry was based on ever-increasing production, even the Soviet scientists continually warned that whale stocks were collapsing, but industry managers and Soviet bureaucrats were deliberately and willfully ignored that advice. The International Whaling Commission banned the taking of humpback whales in 1963, just in time to prevent the extinction of the last few. The Soviet fleets moved on to other species and other oceans.

This post was written and contributed by Dr Jez Weston.

Photo top left: A fin whale on the deck of the factory ship Sovetskaya Rossia, prior to flensing. Photo by A. Berzin. Above right: Sovietskaja Ukraina,  one of the factory boats involved in catching humpbacks of New Zealand, lying on beach at Aliaga, Turkey prior to being scrapped,  1995. Photo by Selim San.