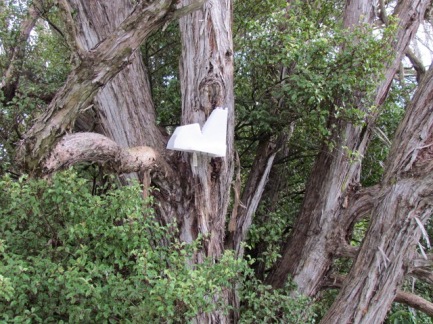 Decisions made by men more than a century and a half ago led to me facing an unpleasant ethical dilemma a few days ago.

That is, should I subject animals to an untimely but rapid death, or a prolonged and (I can only imagine) painful one? The animal I am talking about is the Australian brushtail possum (Trichosurus vulpecula),  introduced to New Zealand in 1837 for the fur trade. And it was a decision I was confronted with when I approached the regional council to have bait stations installed on our land, which borders a gully of beautiful regenerating forest.

END_OF_DOCUMENT_TOKEN_TO_BE_REPLACED

In my search for an image for the previous post, I stumbled across this photographic treasure from 1957: a possum in the care of the Society for the Prevention of Cruelty to Animals.

Knowing what we know today about the destructive impact of these furry marsupials, it is easy to dismiss this image as a quaint artefact of a misguided era.

A possum is an animal worthy of the same humane treatment that any household pet deserves – it is only by virtue of being in the wrong place (through our actions) that it has become a ‘pest’ of such magnitude.

In a similar vein to my previous post about the little German owl, I found another insightful gem about possums, from the official report of the 15th national conference of acclimatisation societies in 1926:

“The Government had appointed Professor Kirk to inquire into opossums and the Forestry Department had also appointed an independent man. Both had come to the conclusion, namely, that opossums did no damage to Native trees. [The President] knew himself that the boards looking after certain scenic reserves had been able to obtain quite a large revenue from the opossums,* and had been thus able to fence the reserves, so that in that way the opossums were doing good in the bush.” END_OF_DOCUMENT_TOKEN_TO_BE_REPLACED

While on a hunt for early accounts of acclimatisation societies in New Zealand, I found this gem – a letter to the editor of the Otago Daily Times in 1867. 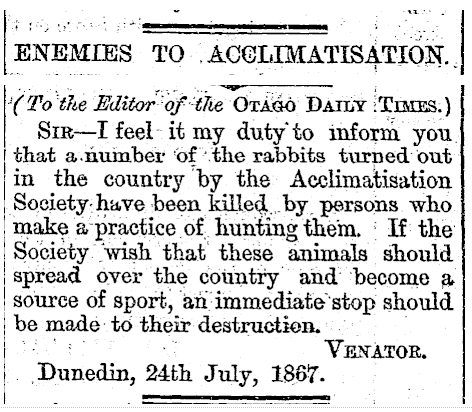 How times have changed!

(And anyone know who a “Venator” is?) 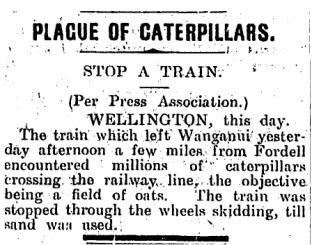 Those of us who get annoyed by white butterfly caterpillars on our cabbages or broccoli may want to spare a thought for pastoral or crop farmers of the late 19th and early 20th century in New Zealand. Some caterpillars were of such plague proportions that on occasion, trains were brought to a screaming (or perhaps more squishy) halt by armies of caterpillars with their sights on a particularly tasty-looking field of wheat or oats. END_OF_DOCUMENT_TOKEN_TO_BE_REPLACED 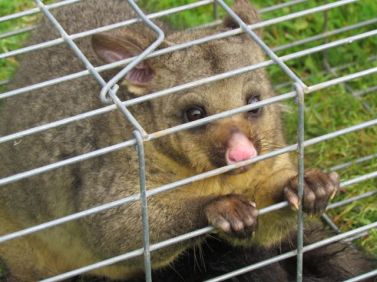 Even this little fellow, still not fully grown, would wreak havoc on vegetables and fruit trees, and in an indigenous forest environment, shrubs, trees, bird young and eggs.

Recently, we stayed at our friends’ lifestyle block near Tokomaru, nestled in the foothills of the Tararua Ranges [click here to view map]. END_OF_DOCUMENT_TOKEN_TO_BE_REPLACED 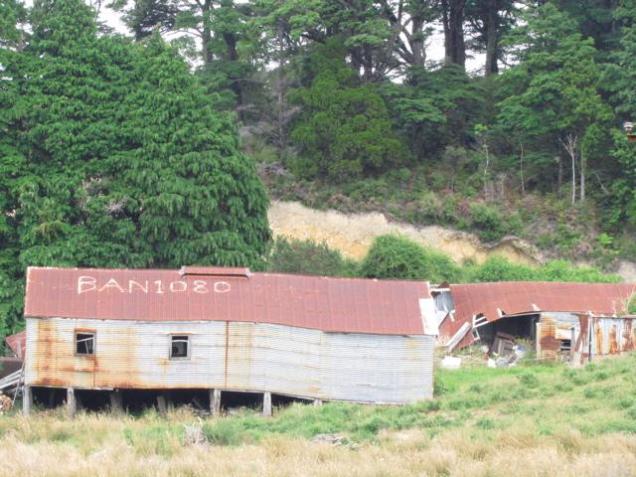 This dilapidated shed, on Wallaceville Road, south of Upper Hutt [click here to view location], has now come to serve a purpose beyond its original one of a wool shed – a protest banner against 1080. END_OF_DOCUMENT_TOKEN_TO_BE_REPLACED

Possums are now estimated to number 70 million in New Zealand, and are acknowledged as a pest that inflicts colossal damage on New Zealand’s indigenous flora and fauna. However, only 100 years ago, they were highly valued and strictly protected.

Possums were introduced to New Zealand with the intention of establishing a fur trade. They were first released in the 1830s, but initially failed to become established. Imports began to taper off after 1900, and until the late 1930s, they were periodically protected as imported game – it was illegal to trap or kill them. As David Young notes, they were regarded by the government as “furry money-spinners” well into the third decade of the 20th century. END_OF_DOCUMENT_TOKEN_TO_BE_REPLACED