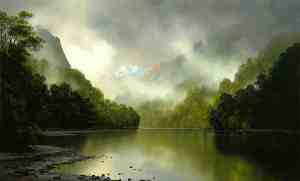 In his history of conservation in New Zealand, Our Islands, Our Selves, David Young provides us with an anecdote that illustrates that the way we understand and value our environment does not always develop following an upwards trajectory through time.

He relates how in 1903, two engineers, L.M. Hancock (from California) and Peter Hay, were commissioned to report on the hydro-electric potential of New Zealand’s lakes and rivers. Their 1904 report drew the following conclusions about Lake Manapouri: “It is not likely, for scenic reasons, that a high dam would be build at Manapouri. The present beauty of the lake is worth preserving to its fullest extent.”

Yet, 60 years later, the government began work on a hydro-electric scheme that would raise the level of the lake 26 metres. It was only after an unprecedented level of public opposition over more than a decade – including a petition of 264,900 signatures – and ultimately leading to the downfall of the National government, that the lake was saved from this fate.

Picture above: “After Rain” (Lake Manapouri), by Tim Wilson. Used with permission from artist.

3 thoughts on “A lesson not learnt – Lake Manapouri”