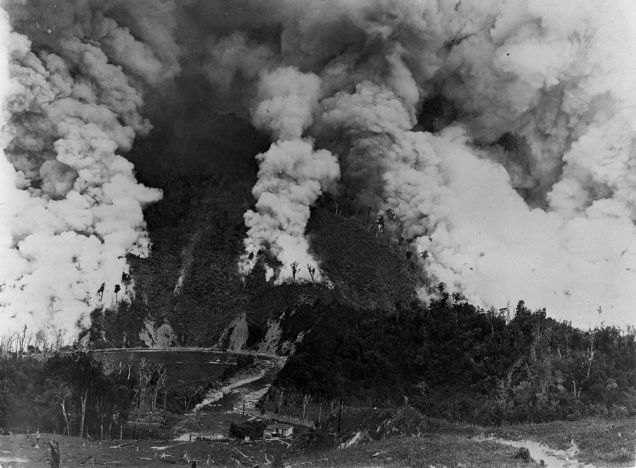 Of all the photographs I have seen relating to New Zealand’s environmental history, this is one of the most powerful. It shows the beginnings of a bush burn off at Puketora Station on the East Coast of the North Island in the early 1900s. This fire destroyed the indigenous forest over 30,000 acres, to make way for farming (probably of sheep). The image’s power lies in the fact that it manages to give a sense of proximity, while at the same time demonstrating the sheer scale of these burn-offs. The vulnerability of the farmhouse in the foreground, on a clearing created by a previous bush burn, is palpable; the farmhouse and the all the farmer’s worldly possessions (including stock) would have been liable to incineration if the wind was to change direction at a critical time.

Because of its relative low cost and efficiency (when it went well), the burn off was a method favoured by settler farmers in the bush country all over the North Island – particularly in the south of the island. But it carried with it immense risks –  if a burn off went wrong, it could go terribly wrong, as was the case during the mid-1880s when thousands of acres of farmland, countless homes and buildings and stock were destroyed in Taranaki and the Hawkes’ Bay by fires that got out of control.

The destructive capacity of burn offs is evident in the rate of forest loss – some scholars claim that it ranks New Zealand highest in the world for rate of deforestation.