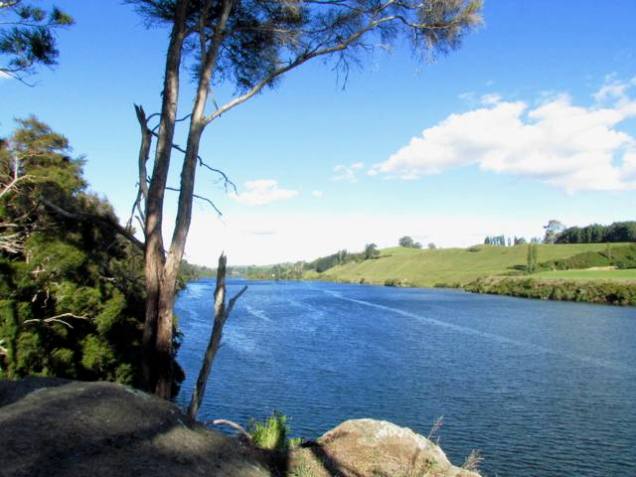 On a recent trip from Rotorua to Hamilton, I stopped to look at what I thought at the time was a section of Waikato River, just west of State Highway 1, south-east of Cambridge [click here to view map]. Waikato River is New Zealand’s longest river, running 425 kms from its source on the slopes of Mount Ruapehu, through Lake Taupo, New Zealand’s largest lake, then flowing through the Waikato Plains before emptying into the Tasman Sea. I was therefore surprised to see a sign at a jetty informing me that this was in fact a lake – Lake Karapiro.

But something didn’t add up – it seemed remarkably “river-like” for a lake.

On further investigation, I discovered that this was an artificial reservoir lake created on the Waikato River in 1947 to power the Karapiro Power Station. It is in fact one of many artificially created “lakes” along the river – the river has a series of eight dams and nine hydroelectric power stations, constructed between 1929 and 1971 to meet growing demand for electricity.

As a consequence of its intensive direct use for generation and industrial purposes, and equally intensive land use in the river’s catchment, especially for agriculture, the Waikato River now suffers from serious environmental problems. After the settlement of a Treaty of Waitangi claim relating to the river in 2008, the Waikato-Tainui iwi (tribe) now have joint management of the river with the regional council, Environment Waikato. Although the river was the source of much spiritual and economic importance to a number of Maori tribes, it was especially significant to the Waikato-Tainui. However, important links were lost with the river subsequent to the New Zealand land wars, when the government confiscated land from Maori in the Waikato region. It is hoped that through this settlement, and the subsequent co-management arrangement, local Maori will be able to re-establish their traditional links with this mighty, but sadly degraded, river.

Photo top left: Lake Karapiro, taken from a rock outcrop. Just behind where the photo was taken, there is a cross marking the deaths of a number of people who have jumped from the rock outcrop to their deaths. This lake is regarded as one of New Zealand’s best rowing venues, and hosted the world championships in 1978 and more recently, in 2010. Above centre: The Waikato River, with the elegant arches of Fairfield Bridge in the distance, one of the six bridges which crosses the Waikato River within Hamilton City. This bridge was opened in 1937. Though the view is picturesque, the water quality is degraded by the impacts of silt, nutrient run-off, sewerage and industrial discharges, among other factors. (Photos by C. Knight)

See also: The conquest of the “noble” forest of Waihou; The slewing of our kahikatea forest: how Jurassic giants became butter boxes;  A history of a little fish – whitebait decline in New Zealand

One thought on “When is a lake not a lake? The case of Lake Karapiro”