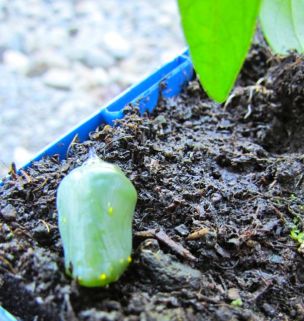 Since my last post, Little wonders (of nature), I have become even more convinced of nature’s amazing capacity to enrapture and surprise. But, this story begins with sadness. Only a day after writing the last post, our household was visited by misfortune. My son misguidedly picked up the now rather plump Sofia, obviously deciding that she needed some more “contact” time. I sternly advised against doing this again, and taking Sofia, carefully returned her to a leaf. However, she remained in a curled-up position, and kept on falling off the leaf. I returned her to a leaf a couple of times before giving up, and carefully placed her on the soil in the pot, where I thought she would at least not incur any injury from further falls. My hope was that she would recover, and climb back up the plant to resume munching.

But to my horror, she remained in a curled up position for the next few hours. I knew from my background reading that these clever caterpillars are known to play dead for a period after being attacked by a bird or other predator, but surely, I thought, by morning she would be recovered and back to her normal self. But morning came, and there was no change.  A gentle prod confirmed that at least she was still alive. Was this some kind of caterpillar coma, I wondered? Periodically throughout the day I came back to check on her and found her condition unchanged. At about 4pm, as I began preparations for the evening meal, I happened to glance at the swan plant (sitting on the kitchen bench beside the window), and was flabbergasted! Sofia had been replaced by a little green bundle, her last skin, shed like a tiny shriveled sock, next to it.

But why was her chrysalis not hanging from the plant I wondered…? [….more internet-based research followed…] Clearly, because the plant was too small and had no twiggy outcrops to support the suspension of her chrysalis. And, she did seem a little on the small side to be beginning her metamorphosis, I worried – but perhaps it was prematurely triggered by the stress of being man-handled by the 5-year old. In any case, there she was…

But more wonders were to ensue. Right at the apex of the swan plant, was a tiny little caterpillar – surely just a hatchling – munching minisculey on a young leaf. How did this little fellow get there? The plant had been in the kitchen since taking up residence at our place, so some enterprising butterfly must have flitted in to the garden centre and left her tiny self-replicating capsule concealed below a leaf. However, the appearance of this little fellow – just when his older cousin had disappeared into her chrysalis – was magically timed.

4 thoughts on “Nature’s capacity to surprise”