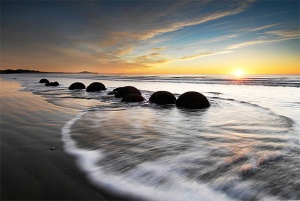 ast week I attended the New Zealand Geographical Society Conference, where I presented on bush burning in the Manawatu. It was an excellent opportunity for those interested in environmental history/historical geographies, with a whole day of panels dedicated to these themes, including a panel focused on the life and works of Kenneth Cumberland (who although a geographer, explored historical geography through much of his work).One of the papers, presented by Professor Eric Pawson of University of Canterbury, explored “the meaning of landscape in environmental history”. His argument was that in the English-speaking world it has become a fairly static concept, but that it can perhaps be better understood within the context of environmental history as a more dynamic concept – one in which the interplay between humans and the environment is more explicitly recognised. (Well that was my take on the paper, anyway.)

It is believed that the word land, landscipe or landscaef entered the English language some time after the 5th century. These terms referred to a system of human-made spaces in the land – spaces such as fields with boundaries, though not necessarily defined by fences or walls. It also referred to a natural unit, a region or tract of land such as a river valley or range of hills as occupied by a tribe, or later, ruled by a feudal lord.

However, it appears to be much later – in the 15th century – that the Dutch word “landschap”, was introduced by Dutch painters to refer to “painting representing natural scenery”, and by the end of the 16th century, this had been fully adopted into the English language as the word “landscape”. Not only the usage, but the etymology of the Dutch term, made up of “land” (land or region) and “shap”, meaning “condition”, clearly indicated a static “state”, rather than a dynamic one. (German has a similar term, “Landschaft”, meaning “tract of land with its distinguishing characteristics”.)

But when writing about environmental history, the term “landscape” is often used interchangeably with the term “environment” (also an ambiguous term) less in a static sense, and more in a sense that recognises the ongoing interplay between humans, environment, and other factors, such as climate. Personally, I don’t think there is a problem here. Words do evolve and take on new meanings as they are adopted by different fields, groups of people and cultures.

Indeed, the incipient forms of environmentalism in many countries (including New Zealand) began with “scenery preservation” – the preservation of something “static”, associated with a state of pre-human influence (and generally appreciated for its scenic value). However, now environmentalism tends to involve a more sophisticated understanding of the environment – one that takes into account human and other influences, and seeks to preserve functioning ecosystems, rather than “states” in a static sense.