I have been reading Kenneth B. Cumberland’s 1981 book Landmarks recently. The book, which was published in parallel with a television series of the same name,* is a colourful presentation (both in the literal and metaphorical sense)  of Cumberland’s views on New Zealand’s environmental history, supplemented by many photographs and illustrations. Some of the archaeological and palaoecological information is now somewhat outdated (for instance, the dates that humans first settled New Zealand and other radio-carbon dates), but it is nevertheless a highly worthwhile read – I particularly enjoyed Cumberland’s animated and often refreshingly opinionated style of writing. 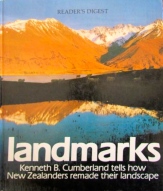 One of the themes that is recurrent throughout the book is the impact of humans on the New Zealand archipelago, and Cumberland dedicates a chapter to the impact that pre-European Maori had on the land. One of the most astonishing stories relates to Christchurch’s environmental history. Cumberland tells us that 4 to 6 metres below modern Christchurch a standing forest is interred in gravel and shingle. The question is, how was it buried?

His theory is that it was caused by a massive flood of the Waimakariri River, which dumped immense volumes of silt and shingle over 60,000 hectares of forest in the vicinity of Christchurch. Furthermore, he suggests that the cause of the flood was human: that during the period of moa-hunting Maori (probably within 200 years of Polynesian settlement, now thought to be in the 1300s), extensive fires throug

hout the east coast of the South Island, often referred to as “the fires of Tamatea”, destroyed vast tracts of forest, including in the high country. It is likely that hunters deliberately set fire to the bush to flush out game birds such as moa, and to make hunting easier. It is almost certain that at times the fires got out of control, and some of the burnoff would have been accidental.

This in turn led to erosion of the steep slopes of the hill country, depositing huge quantities of silt and gravel into the Waimakariri River, which subsequently relieved itself of this burden in this unprecedented flood. The fires of early Maori may have also, indirectly, changed the course of rivers and river mouths, sometimes leading to the destruction of their own settlements.

Whatever the cause of the interment of this prehistoric forest, it seems that the present city of Christchurch is only the most recent of many layers of environmental history which can be found there, and it is unlikely to be the last.

Photo top: A satellite view of Christchurch and surrounds. Waimakariri River can be seen on the top left of the image. Above left: Oxford Forest in northern Canterbury is now one of the closest remaining forests to Christchurch, and one of the few remaining areas remaining in Canterbury. Photo by Rainer Kant.

See also: Vanishing forests: pre-European transformation of the South Island ; What is natural? – the tussocklands of Otago; Earthquake reveals the forgotten streams of Christchurch ; Christchurch: a city haunted by its environmental past?

One thought on “Christchurch – a city built on buried forests?”