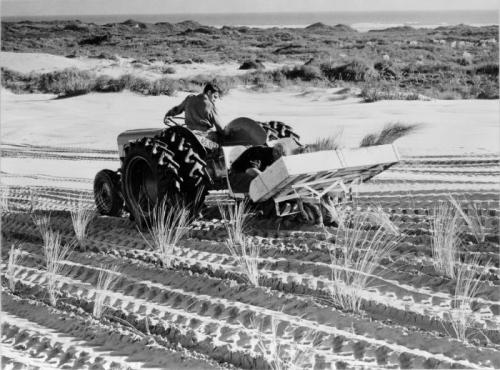 Growing up in the Manawatu, I took for granted the largely homogeneous dune landscape of Himatangi, Foxton and other west-coast beaches – oblivious to the fact that this was a primarily man-made landscape. As Raewyn Peart explains in “Castles in the Sand”, the appearance of sand dunes have been extensively modified, firstly through deforestation, and then through intensive re-stabilisation efforts from the 1930s onwards.

Before European colonisation began in the 19th century, many dune areas had been stripped of forest by Maori, probably for horticultural and general settlement purposes (Maori settlement was concentrated around coastal areas – particularly near river-mouths or estuaries). The early European settlers then grazed and burned much of the remaining indigenous vegetation. This destroyed the root systems of plants and trees, which functioned to bind the sand dunes together, preventing erosion and sand drift. However, with these binding systems completely destroyed in many regions, large tracts of sand moved, blanketing pasture, buildings and roads. This had become a major problem by the late 19th century: the area of coastal drifting sand was estimated to be about 40 thousand hectares in 1880, but had tripled to around 120 thousand hectares only 30 years later.

To help resolve the problem, a major programme of dune stabilisation was initiated by the government during the Great Depression of the 1930s. This involved the extensive planting of marram grass, a vigorous tussock-forming grass which is very effective in trapping sand. The grass is from the genus Ammophila (meaning “sand lover”), which is native to the coasts of the North Atlantic Ocean. It has been introduced through much of the former British colonies, and in many places is now regarded an invasive species, including New Zealand, where it poses a threat to the native dune grass, pingao or golden sand sedge. 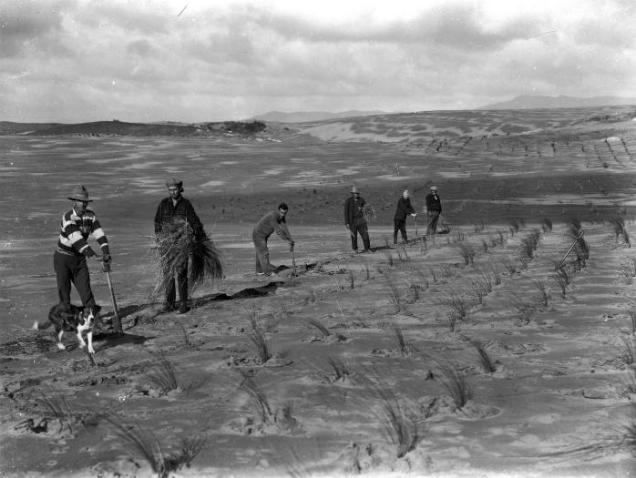 Following marram grass, tree lupins and radiata pine trees were planted in the inner dune-lands. By 1984, over 35,000 hectares of sand dunes had been converted to exotic sand forests, mostly in the North Island. Unmodified sand dunes are now found only in remote areas, such as Spirits Bay in the Far North [click here to view map].

Click here to watch a 4 minute video about a regeneration initiative for the native pingao grass at Turakina Beach, near Wanganui. The video also covers the cultural significance of the pingao grass.