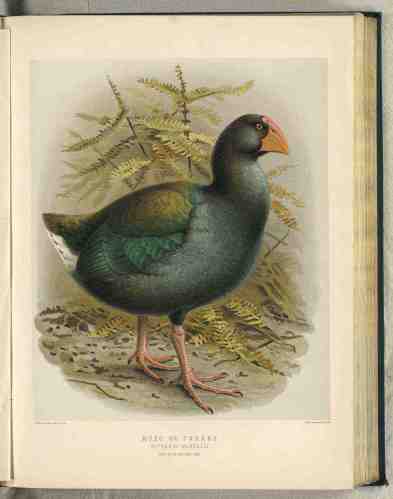 In November 1948, the takahe, which had not been sighted for 50 years and long thought extinct, was discovered in Fiordland’s remote Murchison Mountains. The discovery was made not by a scientist or wildlife specialist, but by Southland medical doctor Geoffrey Orbell. A keen tramper and hunter, Orbell was convinced that the takahe was the source of strange bird calls he had heard when tramping in the area. His tracking and locating of three takahe in 1948 caused an immense stir among the public, and the government quickly closed off this remote part of Fiordland National Park in an effort to protect this last known population.

The excitement this discovery must have caused, among the public and wildlife practitioners alike, is hard to imagine. The following excerpt, from the Southland News in February 1897 – more than half a century before this discovery – demonstrates that even then, most people were resigned to the likelihood that the takahe would follow the same inevitable path to extinction as the huia: END_OF_DOCUMENT_TOKEN_TO_BE_REPLACED