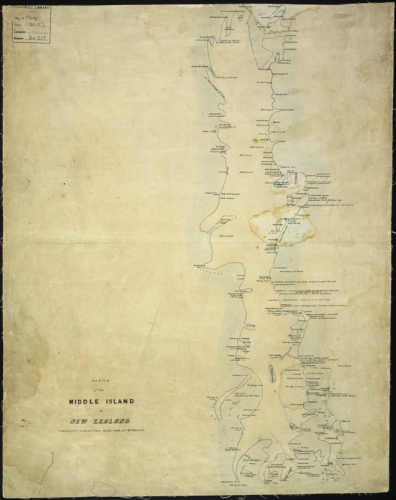 I came across this map in Mick Strack’s essay “Bounding the Land: Cadastral framework on the Taieri” in the recently published “Making Our Place”, and it intrigued me.

It is a map of the South Island, sketched by Edmund Halswell around 1841 from an unidentified Ngai Tahu source. The map shows the South Island so elongated and distorted in shape, that is almost unrecognisable. But is precisely this cartographic inaccuracy which reveals valuable information about how Maori interacted and viewed the land before European colonisation. It shows how vitally important coastal areas – including estuaries and river mouths – were to Maori, both as areas of settlement and as a rich source of food. These areas are sketched in great detail, meticulously capturing the contours of bays and peninsulas; with landmarks of significance carefully annotated. In contrast, the inland and montane areas are “abbreviated”; their scale diminished and few places named.

It is insightful also comparing the Ngai Tahu-sourced annotations identifying places of historical significance and occupation on the map with the comments written by Halswell  (“only fit for boats”, “flat land”, “plenty of seals” etc) which point directly to the land’s utility and potential value as a source of resources for exploitation: a harbinger of things to come.

Map: Sketch of the Middle Island of New Zealand, reduced from original Maori sketch made for Mr Halswell, showing Maori place names of coastal and harbour areas and two lakes. Written on map are comments, including descriptions of the quality of harbours and land, such as ‘only fit for boats’, ‘flat land’, ‘plenty of seals’, ‘plenty of whalers huts’, and navigators’ notes. Not to be reproduced without permission from Alexander Turnbull Library. Ref. ID: MapColl-834ap/[1841-2?]/Acc.527