Through time, not only has our environment been transformed, but also the way we perceive it and the words we use to describe it. No example illustrates this better than the “swamp” to “wetland” transformation. When European settlement of New Zealand began in earnest about 150 years ago, about 670,000 hectares of freshwater wetlands existed. By the 20th century, this had been reduced to 100,000 hectares. Wetlands were seen as swamps – or, as Charles Hursthouse put it in 1857: “Damp and dripping forests, exhaling pestilent vapours from rank and rotten vegetation…” Not only were swamps “unproductive”, they were also undesirable to the European aesthetic – “messy” and without order. In order to transform these swamps into productive and useful land, they first had to be drained. Throughout the 19th century, settlers had drained smaller areas of swampland for their own farms and homes. But in the early 20th century, the government set about massive scale drainage works throughout the country, starting with Hauraki Plains, and Rangitaiki Swamp in the Bay of Plenty, to convert these areas into farmland and settlements.

In 1889, William Pember Reeves gave this poignant description of swamp environments and their desiccation:

Small streams ran out of the swamp… and disappeared in the shingle of the beach. When not disturbed with draining work, their water was sweet and clear. The swamps had been covered with tall flax, toetoe, rushes and small bushes, green and beautiful in the sunlight, but as drains did their work, the peat sank, cracked and dried, the surface was systematically burnt and became stretches of black, hideous ashes and mud, poached up by the hoofs of cattle. 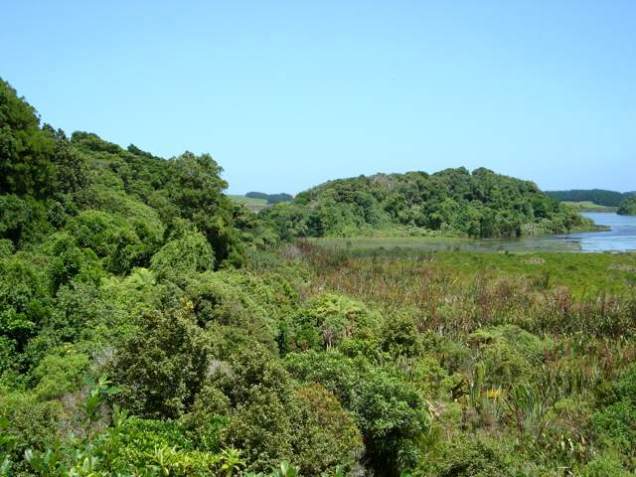 Today, New Zealand can “boast” an 85 to 90 percent reduction in wetlands since European settlement. As Geoff Park states in Environmental Histories, one of the most dramatic declines anywhere in the world. But with that dramatic decline has come a heightening in awareness of the ecological importance of wetlands. No longer “swamps”, wetlands are recognised as having numerous functions vital to both environmental and human health. Acting rather like a giant sponge, they control water flow and quality. Plants slow the flow of water off the land, absorbing excess water during flood events. During dry periods, stored water is slowly released from wetlands, maintaining flows. Bacteria in the damp soils of wetlands absorb and break down 90 % of the nitrogen contained in farm run-off (such as in fertilisers and animal waste). Plants also trap waterborne sediment, preventing silt entering streams and harbours.

Wetlands are a highly productive ecosystems, providing habitat and a rich food source for fish, birds and other animals. They absorb large amounts of water and nutrients from outside sources and contain micro-organisms (fungi and bacteria) that efficiently decompose and recycle nutrients. [This information about wetland functions sourced from Northland Regional Council]

This article was inspired by Geoff Park’s essay “‘Swamps which might doubtless easily be drained’ – Swamp drainage and its impact on the indigenous”, in Environmental Histories of New Zealand (pp.151 -65).

Photo top: the boardwalk through the wetland at Papaitonga, south of Levin, Horowhenua. Above: the view of the same wetland from the lookout platform, C. Knight.

One thought on “From “swamps” to “wetlands””