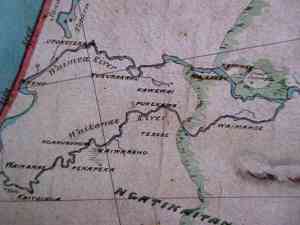 Of the many fascinating stories about New Zealand’s rivers, none would be more mysterious that the case of the disappearing river of Waikanae.

About 120 years ago, the Waimeha River forked off the Waikanae River near the current road bridge south of Waikane township. It then meandered through the current Waikanae township, largely following the route of what is now Te Moana Road. As it neared the coast it sharply changed direction southwards to follow the coastline, before eventually meeting up with the Waikanae River and making its break out to sea.

However, as Chris and Joan Maclean relate in their 1988 book Waikanae Past & Present, the upper reaches of this river disappeared completely sometime after 1890: “Why and how it did so is not known, but it is probable that a realignment of the Waikanae River channel was caused by flooding or some other natural force [and influenced the course of the Waimeha]. It seems unlikely that anyone undertook such a massive exercise in aquatic engineering, even though the small Waikanae community of the 1890s stood to gain from the disappearance of the Waimeha” (pp.153-4).

The once substantial river (significantly wider than the Waikanae, as can be seen from the 1872 map, above), has now been reduced to a small stream, and only appears above ground west of Waikanae Park, about 2 kilometres from the coast. Its current course can be viewed here on Google maps.

[Figure above: a 1872 map showing the Waikanae and Waimeha Rivers separating just below the railway bridge and then rejoining near the coast (Image used with permission from Land Information NZ, larger map can be seen in Waikanae Past & Present, p. 153)]

One thought on “The mysterious case of the disappearing river”