I recently had the great pleasure to read John Mackay’s book “Wild rivers”, published in 1978, in which he recounts with remarkable descriptive detail the rafting adventures he and his mates had during the 1970s. He describes adventures on the Upper Buller Gorge, the middle Clarence, the Motu, the Wanganui, and the Karamea – all undertaken on home-made rafts, constructed using inner tyre tubes, timber and ropes, with accessories such as life-jackets either borrowed or improvised.

The accounts are immensely entertaining – Mackay’s is irrepressibly irreverent, refreshingly opinionated, and agile with words – particularly when describing some of the predicaments he and his friends find themselves in. I am not sure that the notion of PC had emerged at this time, but if it had, Mackay has blithely ignored it, probably making the book much more entertaining than a book on a similar subject today.

To follow are excerpts from his account of his 1974 expedition down the Karamea River with two friends. After making the arduous tramp in, carrying the raft materials as well as tents, food and everything else the needed, they began assembling their rafts near where Kendall Creek joins the Karamea:

“Nearby was a thicket of beech saplings, which we thinned out for the raft timbers. It was pleasantly cool inside the forest and we worked energetically under the supervision of the local bush robin.”

“By midafternoon we were just about ready to go. JC was standing down by the water looking like a character actor in a Walt Disney epic. He’d been unable to borrow himself a lifejacket in Christchurch, so at the last minute he’d improvised one with a blow-up plastic cushion which was held in place on his chest under a Mickey Mouse tee-shirt. Fortunately for the dignity of the expedition Mickey Mouse disappeared when he zipped up his old japara parka. Then he strapped a building labourer’s helmet firmly on tops of his head, jumped on his raft and headed rapidly downstream …”

The going was difficult, and initially, the group spent as much time portaging (getting out of the river and dragging their rafts to a point where they could paddling them down the river again) as they did paddling:

“The river was a ridiculous mess of boulders and drops and chutes. Often the boulders were too thick on the ground to float between and we had to stumble about in the water dragging and lifting our rafts through. I watched JC capsize and get washed backwards over a small chute. The stupid bastard seemed to be enjoying himself. He’d hopefully christened his raft Whio because of the well-known ability of the whio (blue mountain duck) to negotiate rough rapids.”

That day, they met the infamous hermit, Snow Meyer, who lived entirely self-sufficiently in the near-wilderness of the Karamea. He was a man of few words. He was intrigued by the group’s rafting ambitions, but was skeptical about their success, particularly given the onset of winter: “‘First frost of the winter last night. Be cold from now on. Not the time of year to be going rafting really.’ Our raft trip seemed to tickle his fancy. He had a black sense of humour and an unnecessary preoccupation with drownings.” 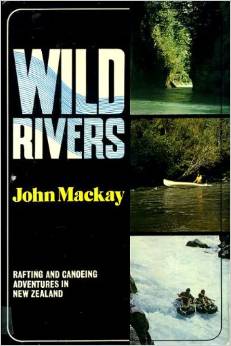 In many places, the river is “more rocks than river”, with rocks the height of a three-story building strewn into the riverbed by the massive Murchison earthquake of 1929. The three friends eventually descended the river, emerging from the gorge exhausted but largely unscathed – and only half-believing what they had achieved.

Though replete with “laugh-out-loud” vignettes and descriptions, this book also had a serious message (apart from providing instructions on how to build your own raft out of inner tubes). At the time, recreational users of rivers were becoming increasingly concerned that eventually all New Zealand’s remaining “wild rivers” would be harnessed for hydro-electricity generation. There were no legislative mechanisms at the time to protect rivers, or stretches of rivers, from development.

In 1981, the “Wild and Scenic Rivers” amendment to the Water and Soil Conservation Act allowed for such protection for the first time in New Zealand’s environmental history. This owed much to the lobbying of “white water” enthusiasts such as Mackay.

See also: The history of WCOs – the “national parks” of our rivers