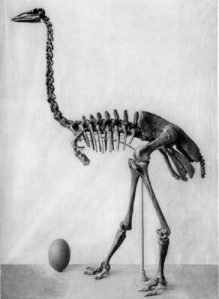 The previous post Prehistoric revelations of a Manawatu flood made me curious about other signs of moa habitation in the Manawatu area. I came across an intriguing article in a 1908 newspaper which reports on a find of moa bones in Kimbolton, and the controversy the find created.

The question it raises is, were moa still roaming the densely forested hinterlands of the North Island even as Europeans were first arriving on these shores?

But let the discoverer of those bones tell the story. In a letter to the Feilding Star in July 1908, Mr Thomas A. Bryce, a farmer from Kiwitea (see: Kimbolton and surrounds – “putting the small man on the land”), wrote:

“What time has elapsed since the moa became extinct?Allow me to give you proof that the moa was not extinct at the time New Zealand was first settled by the British. It is a bold assertion to make. On the 21st of the present month I unearthed some moa bones. This bird had evidently died in a hole made by the uprooting of a large tree, the clay falling back from the roots covering and preserving the remains. The bones I found were lying above broken roots, some of which are still fairly sound. The surface roots and trunk were burned presumably when the land was cleared in 1883, as masses of ashes are still in existence almost on the surface. Assuming that the tree lay fifty years – probably not nearly so long – before it was burned, it would seem that this particular moa lived not more than seventy-five years ago, and possibly long since then.”

While tempting to dismiss Mr Bryce’s assertions as a crackpot theory dreamed up by an enthusiastic but amateur archaeologist, his hypothesis in fact attracted support from authoritative quarters.

The well-respected engineer and surveyor Mr H. C. Field (1825 – 1912, who had himself presented papers to the Philosophical Society on the discovery of moa bones in the late 1800s), weighed into the debate, providing the names of a number of old Maori chiefs of Wanganui and Waitotara (south Taranaki) who told him in the early 1850s that they had hunted the moa up to about 1820-30. They described the moa as living in the skirts of the forests, and fighting with each other by striking forward with their feet. An interpreter, Mr G. Rees, also told Mr Feild that in about 1830 that the chief Te Teu Heu [sic – probably Te Heu Heu] had a moa cooked at a feast at his pa near Tokaanu (on the southern shores of Lake Taupo), and a Maori who was at the feast described the skin as being as large as that of a bullock.

In the Manawatu, permanent Maori settlements in pre-European times were almost exclusively near the coast and along rivers. The dense inland forests were rarely ventured into; cultivations and bird-trapping  were predominantly done on the periphery of forests. So it is certainly not unthinkable that some moa survived into the 1800s. Though the date – or even period – of their extinction in the Manawatu, or elsewhere in the North Island, may never be established with any certainty, it is certainly still a question that captures the imagination.

3 thoughts on “When did the moa become extinct?”