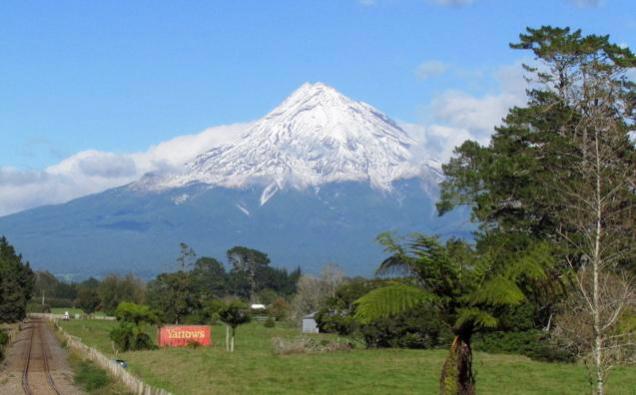 Nowhere tells more starkly of the duality in our relationship towards the natural environment than Taranaki: the dichotomy of the “productive” and “scenic” landscape.

Taranaki is known throughout the world for the almost perfectly conical mountain which rises up through what are otherwise the flattest of plains. This mountain and the region was made famous by its being used as the backdrop for the film, “The Last Samurai”. Indeed, New Zealand was chosen to shoot the movie due to the mountain’s remarkable resemblance to Japan’s Mount Fuji – also a perfectly conical mountain that stands alone on the plains of central Japan.Like the Japanese, who have strong cultural and spiritual connections with Mount Fuji, Taranaki people also identify strongly with the mountain, and many –  especially those of an artistic bent – are drawn to the region because of creative inspiration they derive from the mountain.

But the land around the mountain also tells a fascinating story – about how New Zealanders have historically perceived and engaged with the land.

Prior to human settlement, the entire region was covered in dense forest. Maori cleared some forest – mainly in the coastal areas – but it was following settlement by Europeans from 1840 onwards that most forest clearance occurred. 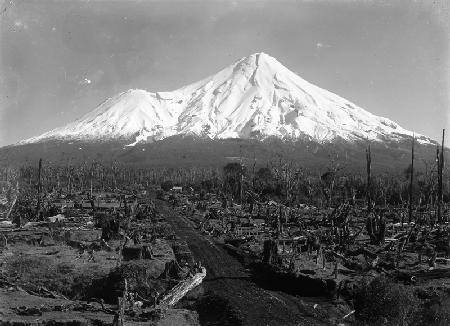 Combined with the region’s mild climate, the free-draining ash-derived soils of the plains surrounding the mountain (particularly to its east), made the region optimal for pasture growth. These conditions made it prime country for dairy farming, and by the 1880s, dairy farming had become the basis of the region’s economy.

Clearance was achieved through first cutting the trees and then burning the area in the following summer. On the prime farming land east of the mountain, this was done intensively in the 1870s and 1880s, after the end of the Taranaki wars. Firing of bush was a risky enterprise; sometimes they flared into huge bushfires and devastated the fledgling dairy farms.

As a consequence of these intensive clearance efforts, the forest on the “ring plain” (the plains surrounding the mountain) was largely destroyed by the early 20th century. Today, less than 10% of forest cover remains on the ring plain, most of that in isolated pockets.

The forest on the slopes of Mount Egmont (now referred to as both Mount Taranaki and Egmont) was retained, at that time primarily because the flat land was far more conducive to farming, rather than through any perceived value of its natural or scenic attributes. Later, in 1900, Egmont became the second national park to be declared in New Zealand, after its not too distant neighbour, Tongariro. The national park soon became hig 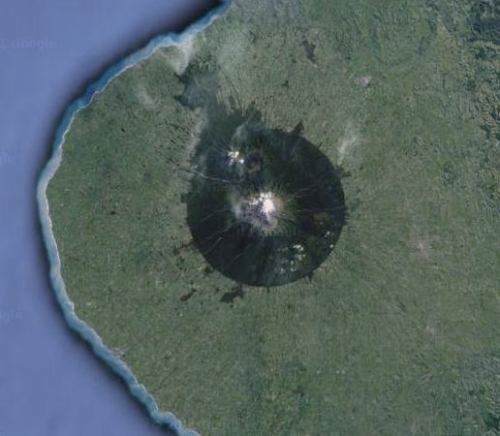 hly valued for recreational use – initially through the tramping clubs that sprung up in the early 20th century – as well as its scenic value.

Today, a satellite view of the region shows an almost perfect circle around the foot of the mountain, within which the dark green of indigenous forest remains. Outside of that, the plains are largely the lighter green of pasture, only breaking back into pockets of darker green in the eastern hill country. No other region shows so starkly our division of land into “productive” and “scenic” landscapes – the latter generally only preserved due to their “unproductiveness”.

Photo top: The mountain, with farmland and railway in the foreground, taken from State Highway 3A north of Inglewood (Photo: C. Knight). Above centre: Forest being cleared near Inglewood, date unknown. Photo by Alexander Walker Reid. Not to be reproduced without permission from Puke Ariki, ref. no. PHO2007-301. Above right: Satellite image of Taranaki from Google Maps.