Eels (or more broadly, tuna) have long been important in the culture of the our islands. For Māori, not only were they an extremely important food source – particularly for those who lived inland, but they were also of great cultural value. For the European New Zealander, eels were perhaps less vital as a food source, but for much of the 20th century eeling represented what was valued about the New Zealand lifestyle – the accessibility of our outdoors for both recreation and supplementary sources of food and income. However, as the health of our environment has become eroded, so too has this ability to hunt, fish, or recreate as freely as we used to. The eel, though less charismatic or cuddly than many of its land-based counterparts, is nevertheless a powerful symbol of the impact we have had on our environment as well as traditional values.

One indication of the eel’s importance in Māori culture is the number of words that were used to describe different varieties and conditions of eel (like Inuit terms for snow): as noted by  David Young in Woven by Water – histories from the Whanganui River, ethnographer Eldson Best recorded at least 166 such words.The number and health of eels in a river were believed to be protected by hanging talismans (as symbols of mauri – the life force of the natural world), usually stones, at the downstream end of eel weirs. Various fishing methods were used to catch eel around the country, and these traditional methods were common up to the end of the 19th century (the only place where they continued for some time after this was the Whanganui River). Of these, the pā tuna (eel weir) was a common device for catching eels in rivers, streams and the outlets of lagoons and lakes. Weirs were used in autumn, to catch eels as they headed downstream to spawn in the sea. Fences in the water guided the eels into a net and then into a hīnaki (eel pot).

However, for the European settlers, rivers – particularly larger ones such as the Whanganui – were vital transport links, especially in the days before a road network was established. During the course of the 19th century, many pā tuna were removed to make rivers more navigable, leading to conflict with Māori. For example, in the 1880s, there were more than 350 pā tuna and 92 utu piharau (lamprey* weirs) in the Whanganui River. Between 1886 and 1888 over 500 tribal members petitioned the government to save their weirs – but by the turn of the century, almost all were gone.

While less vital to subsistence for European New Zealanders, eeling was nevertheless a challenging and rewarding pursuit for boys in particular during much of the 20th century. For many families, it would have also been a welcome supplementary source of protein, especially for those who were familiar with the art of eel smoking.

A fledgling commercial eel fishing industry began in the late 1940s, but it was relatively recently – the 1960s – that a viable export industry became established. However, the eel was not always deemed as desirable: at the same time as a fledgling industry was becoming established, trout anglers were encouraged to kill eels, because they were thought to compete with introduced trout for food.

There are two indigenous eel species in New Zealand  – the shortfin eel (Anguilla australis) and the longfin eels (Anquilla dieffenbachii). The long-fin eel is unique to New Zealand and is found in rivers and streams well inland, while the shortfin eel is limited more to coastal areas. Young eels or elvers migrate from the sea into freshwater streams, where they live as adults for many years (up to 100 years for longfins) before migrating back to sea to spawn in the Pacific Ocean. 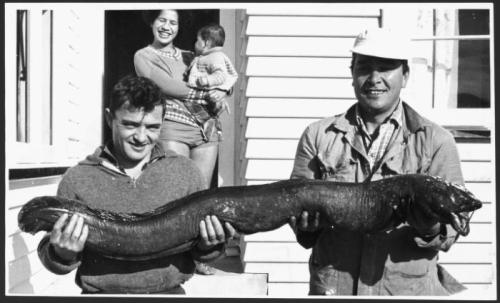 The longfin eel is in steady decline, owing to historical destruction and degradation of habitat (primarily swamp drainage and pollution of freshwater bodies), barriers such as dams preventing migration and breeding, and ongoing pressure from commercial fishing. Historically, long-finned eels have been reported as weighing as much as 40 kg, and photos of fathers and sons with huge eels used to appear regularly in local newspapers (see photo above). But today, due to these pressures, even the most ardent eel fisher is unlikely to catch anything bigger than 10 kg.

Unlike children of previous decades, children today are most likely to encounter an eel in slightly less combative circumstances than yesteryear: the tables have been turned, and rather than eels feeding people, often people are found feeding eels, in nature reserves such as Nga Manu in Waikanae and Mt Bruce in the Wairarapa, where visitors are able to enjoy daily eel feedings. These reserves also provide eels relatively safe sanctuaries, with few threats – human or otherwise, good habitat, and a reliable food source.

Thus, the eel has been the protagonist (albeit an unknowing one) in our environmental and cultural history: it was central to a struggle between European settlers and Maori over competing uses for our rivers in the 19th century, and it has been a barometer of declining wetland and river health and integrity throughout the 2oth century. Now, it is once again central to a struggle over competing values: this time, between the commercial fishing industry and conservationists – the former emphasizing its commercial value, the latter, it cultural and ecological value.**

*Lamprey are not eels, but are eel-like in appearance.

** See, for example, Scoop story “Groups join forces to save the longfin eel”

Sources/further reading: Woven by Water – histories from the Whanganui River (1998) by David Young; Department of Conservation; Te Ara Encyclopedia of New Zealand, Groups join forces to save the longfin eel. Freshwater eels (2005), by Jenny Jones (this is an excellent book aimed at younger readers – but illuminating for older readers too!); Tuna Kuwharuwharu – the longfin eel (2010), by Joseph Potangaroa  (available both as a PDF and hardcopy book).

Photo top: One of the many tributaries of the Whanganui River, which was an important eeling ground for Maori. When Europeans arrived in New Zealand, most rivers and streams would have been embanked by lush vegetation – the conditions which are favoured by eels and other native fish (Photo: Rainer Kant). Centre: 1.7 metre eel, weighing 16 kg, caught by Mr Warren Kennedy in the Wainuiomata Stream, Lower Hutt in 1965. Shows Mr Rangi Goodman (left), and Mr Don Edwards, friends of Mr Kennedy’s, holding it. Not to be reproduced without permission from Alexander Turnbull library, ref. EP-Zoology-Eels-01.