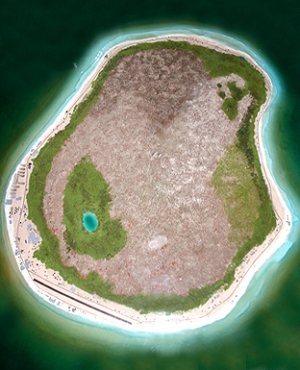 Human rights abuses in Nauru are currently under scrutiny by the United Nations and other organisations. We in New Zealand have also expressed our concerns – and with good reason.

But it makes me wonder, how much responsibility does New Zealand have to share in what is, without question, an unacceptable situation? We were responsible for systematically abusing Nauru’s environment for decades, leaving it in ruins. Indeed, without Nauru’s phosphate resources, it is questionable that the ‘pastoral revolution’ in New Zealand, on which our economy depends, would have even been possible.

As outlined in my previous post Nauru: a picture says it all, New Zealand, along with Britain and Australia, gained the Pacific island of Nauru and its rich phosphate reserves as part of the spoils of the First World War. Over successive decades, these countries strip-mined most of the island for its phosphate, used to make fertiliser. This was a great boon for our agricultural industry (see also The “grasslands revolution”) , but Nauru paid a very high price.

About 80% of the island is now uninhabitable. The image shows the narrow habitable “green belt” surrounding the area mined for phosphate

One thought on “Environmental history and social justice – is there a link? The case of Nauru”