I have often wondered why I am so interested in the link between deforestation, flooding and erosion. I put it down to my love of forested environments, and therefore my interest in the history of these environments. But it has occurred to me that it is perhaps more than this – that it relates also to personal memory, of an event in the environmental history of my lifetime.

That event was Cyclone Bola, which hit the east coast of the North Island in March 1988, when I was a teenager. The cyclone brought 900 millimetres of rain in 72 hours, accompanied by ferocious winds. The ensuing floods overwhelmed river stopbanks, damaged houses, swept away bridges, roads and railway lines, and other infrastructure. Three people died, and thousands were evacuated from their homes. 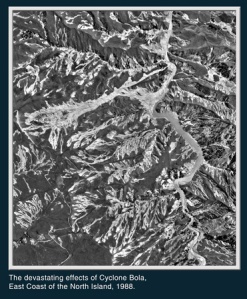 The storm triggered innumerable landslides on the region’s hillside pastures, with some farmers losing a third of their farms’ pasture. Huge quantities of valuable topsoil were dumped into the region’s rivers and streams.  As a consequence of the damage wreaked by the cyclone, an afforestation scheme of unprecedented proportions was initiated on the East Coast (sadly, mainly of the ubiquitous, but fast-growing, Pinus Radiata), and this still shapes the landscape there today.

While the cyclone did not affect me personally, it obviously made an impression, as I remember choosing to do a project about it for one of my classes. The realisation that this event may have influenced my awareness of this environmental issue may seem self-evident, but – oddly – only occurred to me as I read a passage of Brooking, Hodge and Wood’s chapter “The Grasslands Revolution Reconsidered” in Environmental Histories of New Zealand. In their discussion of the New Zealand response to the growing issue of soil erosion in the 20th century, they state:

“Things might also have been different if another year like 1938, with its disastrous floods and soil erosion on the North Island’s east coast, had occurred before Cyclone Bola in 1988. New Zealanders, therefore, had only to accept the flood control initiatives of catchment board engineers, rather than rethinking how bush clearance and overgrazing damaged the land. Many farmers consequently ignored the warnings of soil conservators regarding flooding.”

When a commission was set up to investigate how the sheep industry could operate more efficiently, its report of 1949 concluded that farming had nothing to do with erosion. According to Brooking et al, this view remained largely unchallenged within farming circles until Cyclone Bola.

Nature perhaps was not confident that humans on this archipelago had finally learnt the lesson from Cyclone Bola and, this time, did not wait another half century before sending a reminder. The 2004 storm of the lower North Island only 16 years later led to an estimated 100 million cubic metres of topsoil being washed down the rivers out to sea.

** The more regular followers of this blog may have noticed an uncharacteristic hiatus in activity. This was due to the birth of my daughter, Caitlyn, early last month. Musings on environmental history do not appear to be a priority for her! Normal service should resume soon 🙂

2 thoughts on “The effect of personal memory on environmental consciousness”