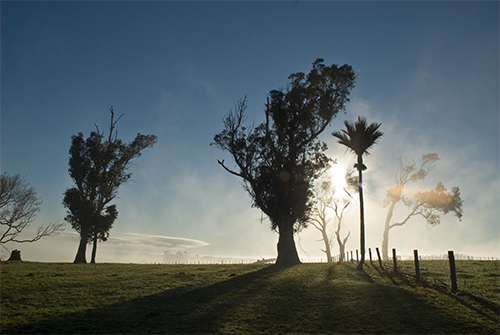 I recently sent this photo from the envirohistory NZ banner to the Stirling University Research Centre for Environmental History and Policy to be used on their related links page. When I did so, I thought it may be a good opportunity to share the “back story” of the photo.

The photo is taken by veteran photographer, Paul Knight, of a farm just north of the Horowhenua town of Levin [click here to view location]. The farm, called Nikaunui, meaning “many (or big) nikau palms” in Maori, is a large sheep and beef farm, owned by the Kilsby family,* a family with a long history in the district.The trees casting shadows in the morning sun are indigenous trees, which once formed part of a thick forest which blanketed the region (the tall palm tree on the right is the nikau palm alluded to in the farm’s name). This forest in the district was cleared in the late 19th century for farming, facilitated by the completion of the Wellington-Manawatu Railway, completed in 1886; little remains in the district today, apart from a handful of small reserves – mainly those that were preserved by long-sighted landowners of the pioneering era [see for example Papaitonga – hidden jewel of Horowhenua]. The photo below, taken from hills to the east of the farm, shows its full extent. 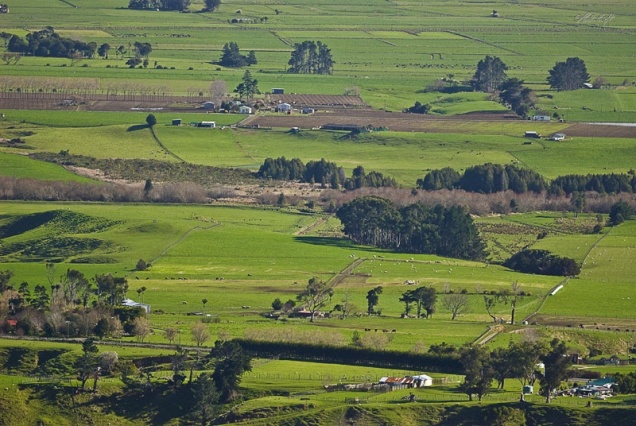 *Tragically, two of the Kilsby family died in the Erebus disaster in 1979, New Zealand’s worst disaster. One of these men owned the farm neighbouring Nikaunui.

See also: View of Tararuas from “the land of the great landslide”; The legacy of G. L. Adkin – keen “reader of the land” ; Papaitonga – hidden jewel of Horowhenua; Lake Horowhenua and Hokio Stream – a hapu’s story