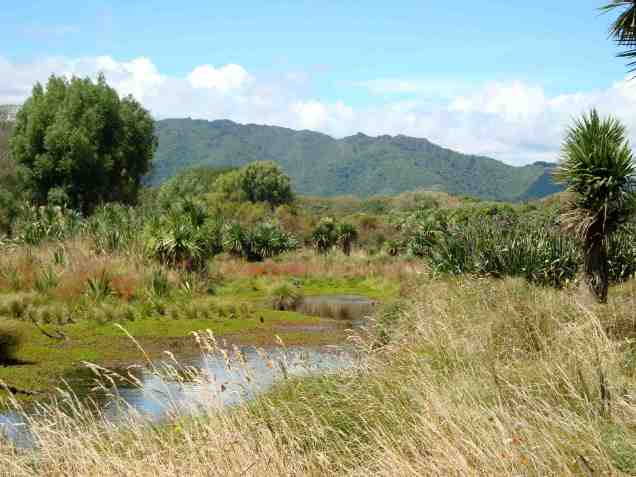 This view, facing east along the Waikanae River just east of the Otaihanga Domain, is of a restored wetland – part of a wider regeneration project along this part of the Waikanae River. Viewed from this angle, with the bush-covered Waikanae hills in the background, it is possible to get some sense of how this part of Kapiti would have looked before it was cleared for farms and settlements in the late 19th century.

This regeneration project is in large part due to the efforts and vision of local man John Topliff, who, 8 years ago, seized the opportunity to transform what had become a “wasteland”, completely overtaken by introduced pest species, into the lowland swamp environment it had once been. Along with his son, and the help of numerous other volunteers and contributors along the way, he cleared the area of introduced pest species such as crack willow, poplars, blackberry and convolvulus, and planted swamp species such as kahikatea, cabbage trees, flaxes and manuka. The wetland area is now thriving, and last year the kahikatea fruited for the first time.

UPDATE: In August 2010, John Topliff (right) was awarded an “Old Blue” award for his contribution to conservation in New Zealand. See: Wasteland to wetland transformation continues.

[Photo above: View of the restored wetland with the Waikanae hills in the background. Right: John Topliff, standing in front of just some of his restoration work along the Waikanae River (photos: Catherine Knight)]