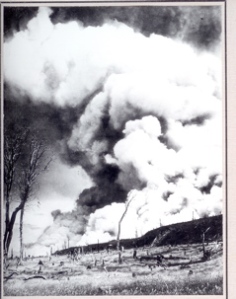 “Evil” is a strong word – but when he wrote “The Evils of Deforestation” in 1909, J.P. Grossmann obviously felt strongly about the issue. He wrote: “Foremost among the inevitable effects of deforestation we must, therefore, rank floods and landslips.” He was not the first – nor the last – to express his concerns about deforestation in New Zealand. In 1877, Campbell Walker, the Conservator of State Forests had warned:

“I should view with very greatest anxiety any clearing of the hills which form the dividing range or back-bone of the island, and am convinced that it would be followed sooner or later, by the most disastrous results, both in the shape of deterioration of the climate, dangerous floods and drying up of sprints and sources of rivers.”

And in his book “New Zealand in Evolution” (1909), Scholefield states:

“In this period the denudation of the forest already had some detrimental effect on the climate here and there, and the severity of floods in the rivers was marked. With the hillsides and the upper reaches bare to the elements, the snow or rain-water passed off rapidly. The streams rose without the slightest warning, tearing down through gorges, eroding the banks, overflowing farms, and devastating the lower alluvial flats with silt and boulders. It was a very disastrous retribution for the recklessness of white man.

In this age of heightened environmental awareness, we tend to assume that our understanding of our impact on the environment has increased. These statements by our forebears a century or more ago show this is not the case – we would do well to take heed of their long-forgotten warnings…

One thought on “The Evils of Deforestation”